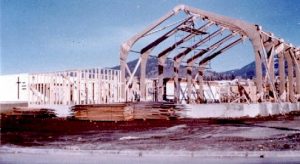 First Baptist church is located in Penticton, BC, in the beautiful Okanagan Valley. We are a multi-generational church which has been involved in the community for over 100 years. For the past few years we have reached out to young and old through ministries such as our Make-N-Take Craft Fair, After School Club and The Ark Youth Centre. We are associated with the Canadian Baptists of Western Canada, the most ethnically diverse denomination in Canada.

Over 100 years ago, in 1907, a small group of people met in the front room of a home in Penticton and began the process of bringing First Baptist Church into being. Soon they were meeting in a little church building on the corner of Main Street and White Ave. The church seated about 75 people. They used a hand-operated, air-pump organ. A Sunday School class met in a dirt floor room that also housed the furnace. The youth were involved in a lot of neat activities, often using the old 1930s church bus, known as the “chicken coop” because it had chicken wire in the windows.

By the 1950s it was obvious a bigger building was needed. The congregation began to look for a new location. A big parking area was one of the requirements and the search was not an easy one! In 1956 the current location was found, but at that time it was surrounded by orchards and had only one house east of it. Some of the congregation thought it was too far out in the country! However, because it was the best option available, the land was purchased. Volunteers built the gym, where services were initially held. A great time was had by all who worked together on the building; they got to know one another well. 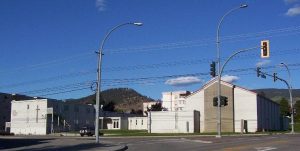 One of the early evidences of God’s work with the congregation was the way everybody pitched in, gave generously and worked together. Ten years later, in 1966-67, the sanctuary was added. The way Norm Hovland, the then pastor, tells it, the church was short $25,000 and a letter was written to the denomination, known then as the Baptist Union of Western Canada, asking for a loan. The same day his letter arrived, $25,000 also arrived at the denominational offices. The denomination immediately passed the money to the church. God was aware of the need even before the request was made!

Today we have a wonderfully equipped sanctuary, office space, meeting rooms, gym, kitchens, education wing, and youth centre. Our building is used not only by the church but also by several community groups. In 2018-2020 we replaced three main roofs including the original roof on the Sanctuary. We continue to do upgrades to our building to keep it safe and inviting.