News from Women in Focus 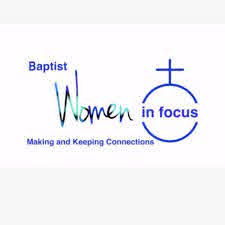 In 1887, The Baptist Women’s Home and Foreign Society for Manitoba and Northwest was founded with five mission circles, the first of which the wife of Pioneer MacDonald gave leadership to with the motto “Whatsoever thy hand findeth to do, do it with all thy might” (Ecclesiastes 9:10). Their hands found much to do making clothes for the needy which opened the door for Christian Education. Within 10 years they had grown to 25 circles with 420 members and 7 mission bands and raised funds not only for supporting women missionaries overseas but providing grants to new church plants in Manitoba. Ten years later The Organization of the British Columbia Baptist Women was founded and in another ten years, the two groups and the prairie circles amalgamated to form The Baptist Women’s Missionary Society of Western Canada. In 1907, this statement appeared in the July issue of The Northwest Baptist: “However great have been the labours wrought by men of our churches, more abundant are those of the women. Almost every new departure has been undertaken by women first of all.” Great were the sacrificial givings of women.

What a rich heritage we have! Did you know that a resolution was passed at the 1912 Baptist Union Convention stating: Whereas a great world movement among Christian nations is giving the right of franchise to women, promising much for the rapid advancement of Social and Moral Legislation, The Baptist Union heartily supports the principle and trusts that the day might soon come when the women of Canada might have equal rights with men at the ballot box.” We were the first Canadian denomination to endorse a woman’s right to be counted as a “person” with the right vote. I am so proud of the legacy we have in supporting and recognizing women and honouring the gifts they bring to God’s mission.

Women in Focus has endeavored to carry on this legacy of ministry, strengthening our local churches with leadership development while continuing to support many projects overseas in partnership with Canadian Baptist Ministries (CBM). We have offered workshops, retreats, Bible study materials, mission
projects, monthly devotional readings and community for the mutual building up of one another in Christ. Empowering Women to use their God-given gifts with confidence and compassion! November, 2020

The End of an Era
Women in Focus has come to the difficult conclusion that it will no longer operate as a working committee of the CBWC. As churches have greater access to a variety of women’s ministry resources, we receive fewer inquiries, retreat numbers have dwindled and CBM is able to appeal directly to churches with wonderful opportunities to contribute to their mission and relief projects. We believe it is time to allow this aspect of women’s ministries in the CBWC to wind down. We know that there are active women’s groups in many churches that do not need an organization such as WiFi to continue their ministry. Let me explain what this means going forward.

In my current role as Director of Ministries for the CBWC, you can still contact me for resources and support for your women’s ministries. Manitoba and BCY women will continue working in their regions. You can still participate in the Great Canadian Bible Study which is sponsored by Canadian Baptist Women for all of Canada and the study is on our website. The Women in Focus website will continue to be accessible for Bible study resources, devotionals and links to the Day of Prayer materials. I will continue to write the Focusing In . . . devotional as interest remains. Our facebook page will be active for the time being with updates of events that may interest you. So, our resources will continue to be there, but not as actively promoted as before. Women in Focus will relinquish its seat on the CBM board as of May 2021, and that board position will be filled by recommendation from Canadian Baptist Women. We will also no longer be represented at the Baptist Women of North America council.

Women in Focus has remaining funds for seeding new projects and we are praying that God will begin to stir fresh ideas and give birth to new ministries by women in our churches. “Unless a seed dies . . . it remains a single seed, but if it dies, it bears much fruit.” (John 12:24) By releasing Women in Focus into the ground, we look with anticipation to what God will bring forth in abundance.
I am so very grateful for the women that have partnered with me over the 20 years that I have been
your director. If space allowed, I would make a collage of all the wonderful committee members but
want to particularly give thanks for these past presidents: Judy Dozois, Heather Thomson, Moreen
Sharp, Sandi Smoker, Alicia Dykstra and Carol Parsons (current president) and our faithful treasurers,
Alice Sowden and Janet Alexander. I believe we accomplished great things, tried new ventures, laughed and cried all for our love of the Father, the call of Christ and by the Spirit’s power and direction. It was fantastic to be part of this 134-year legacy of “empowering women to use their God-given gifts with confidence and compassion.” Thank you so much for the opportunity to serve in this capacity.
By grace alone,
Faye Reynolds